There are some people that only want to brew up top tier decks and if it isn’t first rate, then they don’t want to try and do anything else. However, I look at making up a new deck a bit as a creative experience.  There are lots of people who paint or write or act but will never reach those upper echelons of the craft…but that doesn’t invalidate their creative efforts or lessen the pleasure they get from pouring their energy into their activity of choice. My creative activity of choice is making a new deck that is ostensibly only played around the kitchen table with my friends…and that is just fine. I will never join the ranks of the Pro Tour with any of my decks, but I will always enjoy the process of building a new fun deck to play with my friends. So, today I’m going to share my take on a fun Casual deck that I will be playing at our next Kitchen Table card night.

I’ve seen a number of pros talk about the power that can be harnessed with Goblinslide and Quiet Contemplation. These are very similar enchantments that reward you for casting non-creature spells and you can trigger them to have an additional effect.  The effect is different, but both of them are 100% repeatable and impact the board enough that you could gain a pretty significant advantage. Both enchantments have been suitably potent that they have been used in a viable draft deck in the right circumstances. 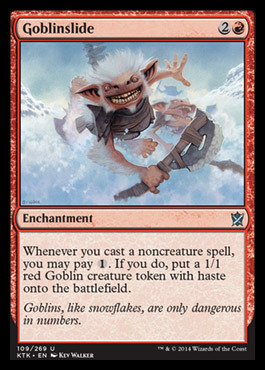 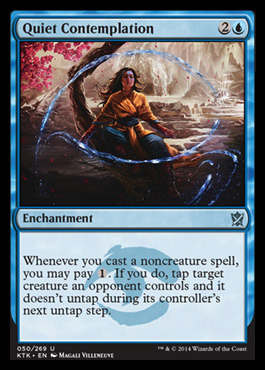 With that in mind I set about building a deck that could exploit these two intriguing (and deceptively powerful) cards.  But what sort of deck do you build around these cards?  The obvious starting point would be a pile of Burn spells to eliminate threats and allow you to get the engine of the deck started.  Burn out their creatures, tap the remaining ones, and make Goblins…seems simple enough.  However, those Burn spells need to be quite efficient because you need additional mana available to trigger the Goblinslide or the Quiet Contemplation, so efficiently costed spells are key. However, the issue of card draw starts to emerge because unless you can burn out your opposition you are likely to run out of gas pretty quickly.  So, there are a few interesting options that can be used to help with some additional card draw and preventing you from running on fumes. Let’s see what we’ve got:

Ok, well the creature package is pretty small, but the Windscouts, the Jeskai Elder, and the Riverwheel Aerialists all come with Prowess…meaning that they can often tussle with bigger creatures without much trouble.  The Scaldkin are there as fairly useful fliers that can “Shock” something.  It is hardly an earth shattering creature package but you do want a few critters to keep your opponent honest.

The Enchantments make this deck go because if you can start to trigger them regularly you can make extra Goblin tokens or tap down your opponent. That is basically the whole premise of the deck anyway, so ideally I want to see one (or both) of these in my opening hand anyway.

The instants and sorceries are the fun part because they are burn, card draw, or just plain old Trumpet Blast to help your little Goblins punch through for a pile of damage. The newest treat for this deck is Collateral Damage which suits this deck perfectly.  Can you imagine casting Lightning Strike, dealing three damage to your opponent, triggering Goblinslide for a mana, and then casting Collateral Damage for an additional three damage, sacrificing the Goblin token you just made…and then activate Goblinslide a second time and STILL having a Goblin Token on the table?  That feels very achievable…and 6 points of direct damage is nothing to sniff at.  Sure, it feels a little clunky but it just might get the job done around the Kitchen Table.

The deck hardly looks over powering, but for a deck packing no rare cards it feels like it could do some pretty powerful and hilarious stuff.  Who doesn’t want to flood the board with a load of Goblins and over run your opponent?  Seems like it might be legit little deck.  It also meets most of my key components…it is a) inexpensive to build b) uses spare parts that I have in some my boxes and c) looks like it could be a load of fun. Sounds like a win to me!

Well, that’s all for today…thanks very much for taking the time to read!

Until next folks…have a great MTG day.