Here’s a situation we all face in this game.  Magic is a collectible card game.  As such, you are always collecting the cards and looking for the next card you want and need to add to your collection. Some of those cards you want for a new deck, others you want because of the cool art, or because they are foils, and other cards are just cool to collect.  Along the way you accumulate all sorts of other cards.  Many of these cards are commons and uncommons that seem to multiply in short order. Others are chase rare cards that you REALLY want to add to your collection.  Others are still rare, but aren’t very good…in fact, many of them are terrible.  These are called Bulk rares.  They are called “Bulk” because you can find them in the “bulk” bin at your LGS (Local Game Shop) and just sitting there doing nothing.

What to do with these bulk rares?  For many they sit in a binder and just…be.  They don’t get played.  They hardly get LOOKED at.  They just sit in their sleeve.  No one will actually trade for them.  Few stores will take them off your hands with their buylist.  No…these are truly cast away cards.  Even commons get more of a lease on life with Pauper formats.  However, Bulk rares just sit and do NOTHING.

Well, this is where I come along.  I’m always looking for some way to brew up a new deck without costing myself much in the way of money.  Let’s be real here…I have BOXES of stuff that I’m not playing.  That’s thousands of cards that are just sitting there and not getting played.  Surely, somewhere in amongst all those cards there are 60 cards that I can eke out into a deck.  Well, today I think I’ve managed to make it work…and surprise…I think I even found a way to slide in a couple of M15 beauties.  I call this Casual Masterpiece…American Bulk (rares)…BEHOLD!

This deck is actually very simple in terms of game plan.  Play a dude…suit him up with Bestow creatures.  Smash.  There are some of the best Bestow creatures in Hopeful Eidolon, Everflame Eidolon, Ghostbalde Eidolon and Thassa’s and Purphoros’s Emissaries that can all make combat just miserable.  Fencing Ace is another unheralded critter with Double-strike that can just make an opponent cry if he gets suited up.  The Ordeals have long been good, and Purphoros’s ordeal is a perfect fit. No, generally the game plan is very straight forward and not unlike the plan from many a Draft deck, however, mix in some bulk rares for variety’s sake and we can make for a spicy game with some interesting twists and turns.

The first piece of wonky deck-tech is Daxos.  This guy is so close to being good…he can let you play your opponents cards, has a form of quasi evasion and a 2/2 for 3 mana is just a shade under the curve meaning he’s playable…sort of…but just not quite. However, suit him up with a Bestow creature and suddenly he becomes far more interesting and more of a nuisance.  He can outclass 2 drops meaning your opponent will need to block with multiple creatures (which always feels bad) or have you start nabbing stuff off the top of their deck.  Perhaps it says something about the sort of player I am, but I really, really, REALLY enjoy beating up my opponent with their own creatures and spells.

The second piece of truly bizarre deck choice is Fated Retribution.  7 mana board wipes are completely unplayable in 60 card decks right?  Well, I for one am willing to give this one another lease of life.  It’s actually a very powerful spell, and at Instant speed could really be back breaking. I’m willing to give this a try and see whether or not it can cut it.

Perplexing Chimera is another odd choice, but there’s no mistaking that the ability to switch owners of a spell is intriguing and the fact that it sits there as a threat, waiting to de-rail a spell is enough for me.  I think this is a very funny card and really can shake things up as your opponent attempts to play around it.

Silent Sentinel is yet another odd choice but when you consider the context of the deck it quickly becomes apparent why he’s in this little build.  Whenever he attacks you get to return an enchantment from your graveyard to your hand.  This is quite a powerful ability when the bulk of the creatures in the deck are enchantment creatures.   A 4/6 flier is also pretty handy even though he’s a greedy mana sync, but as a one of is quite reasonable.

Boonweaver Giant and Spectra Ward are my latest discoveries.  This pair from M15 just scream “PUT ME IN AN ENCHANTMENT DECK!”.  So I did.  The absolute best part about this combo is that if you cast Boonweaver Giant you can tutor up Spectra Ward from almost ANYWHERE! Graveyard? Sure thing. How about in my hand? No Sweat! What about in my library?  Go nuts! Then, once you get Boonweaver all paired up with Spectra Ward you have a 6/6 creature with protection from basically everything.  It’s actually gross. Now people say “but it costs 7 mana!”…and I simply respond “it sure does…but when I’m digging up a 5 mana aura to attach to it, it’s like I’m casting 12 mana worth of spells and really only spending 7.  That’s a bargain if I’ve ever heard one”.  Besides, there are very few things that actually outclass a 6/6 creature with protection from EVERYTHING, 7 mana or not. 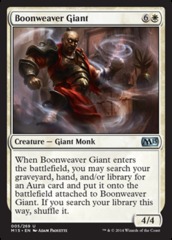 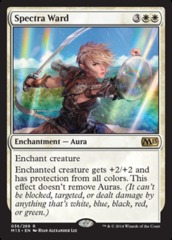 The last piece of truly bizarre deck-tech is the choice to run Pyxis of Pandemonium.  This is usually a terrible card and something that you don’t really want to play…unless you’re simply using it as disruption to throw your opponent off their game plan.  Many decks are developed to play a certain way and with a large number of Scry abilities want to set up their draw steps very carefully to maximize each and every time they draw.  However, slide this card into your deck and just start screwing with their scrying and exile the top card of their library.  You have no idea what you just exiled from their deck, but I bet they probably wanted it.  As for this deck, with 28 permanents and 24 lands you don’t really care what gets exiled because when you sacrifice the Pyxis you’re reasonably assured to get most of it back.  Besides, you’re playing a souped up draft deck with some bulk rares…who CARES what you exile…it can likely be replaced by something.  I just think this card makes for a hilarious random game and just puts such a monkey wrench in the game plan of so many decks that I just need to find it a slot. 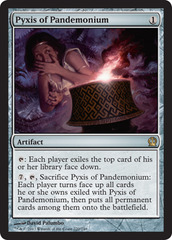 How does this deck fair?  Well, as it is fairly experimental I haven’t had a chance to play it against too many people.  I had one of my friends stop by to play one evening and the deck fared very well.  The life gain that can be achieved by Bestowing a Hopeful Eidolon on something can really push a game and make it very difficult to dispatch this deck.  Attach the Eidolon to something with Double Strike and things get even better.  Also, the flexibility of having Bestow creatures actually lowers the curve where you can get out and play a number of smaller threats early and then later in the game, as you draw others, allows you to suit up one as you ready for the kill. Sea God’s Revenge is just a blow out waiting to happen and Voyage’s End is just a very versatile way of holding off an aggressive opponent.  Is it a finely polished deck ready to take down a PTQ?  No way…but as a cheap and fun casual brew I think it fits the bill and can do some funny things to keep things interesting.

Well, there we have yet another funny Casual Brew for you to test out at home.  Give it a whirl…I’d love to know if you have the same success I’ve had.  Also, go ahead and flip through that binder and see if there are any bulk rares you can use to spice up a deck.  No one said that every deck you make HAS to be tier 1 competitive ready…sometimes brewing fun Casual decks like this can be just as fun.

Well thanks for reading and until next time, keep it fun, keep it safe…keep it casual.