Two weeks ago, we took a look at Magic‘s Sealed Deck format and went over some basic techniques when constructing a Sealed deck. Last week, we opened six packs of Shadows Over Innistrad and applied some of the initial techniques we learned in the first article to begin building a Sealed deck from the pool of cards we opened.

This week, we’ll continue to use the guidelines presented in the first article to see if we can finalize a solid deck from this challenging pool. Now that we’ve organized our cards by colours and types, let’s review our bombs and our removal in each colour. This will give us a stronger idea of where our deck should be heading. 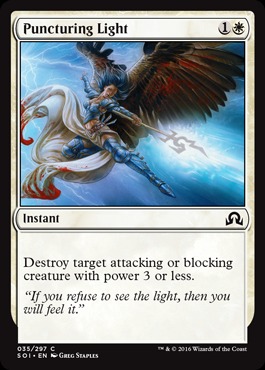 There’s really not a lot to work with here. I like Pious Evangel and think of it as a strong card but it’s not enough on its own to merit playing White. Our only hard removal here is Puncturing Light and it’s conditional at that: It won’t be helping us at all in the late game. Our strength in White, as mentioned in the previous article, lie in our combat tricks and enchantments: Expose Evil, Survive the Night and Tenacity as well as Gryff’s Boon and Hope Against Hope can be great cards in the right decks. That being said, this pool of White cards doesn’t have an end game nor a way to strongly interact with our opponent’s board. I feel we should set White aside as suboptimal.

Hold on a second. I’ll admit, Blue may initially look bad. If we look closer at the cards, however, there’s a bit of a control game hidden in our pool. I particularly like our two copies of Stitched Mangler and our two copies of Uninvited Geist. The Manglers are stronger than they look and can stall our opponent while the Geists can become very aggressive if they manage to transform into Unimpeded Tresspassers. Another thing we can’t overlook is our fliers: Niblis of Dusk, Stitchwing Skaab and Stormrider Spirit all provide solid air support, both offensively and defensively.

As with White, we have no hard removal here. What we do have, though, is plenty of ways to draw cards. Ongoing Investigation is incredibly strong by turning damage into card advantage. Vessel of Paramnesia replaces itself. Jace’s Scrutiny is a fine combat trick that also replaces itself. Catalog draws us cards and enables Madness. Pieces of the Puzzle can look for removal and fuel our graveyard. Even though I previously mentioned I’m not crazy about Gone Missing, it can still remove a permanent from our opponent’s board temporarily, slowing them down and allowing us to Investigate. As I mentioned last time, I like to play my bombs, draw into my bombs and win the game, in that order. Blue can allow us to do all that. It may not be ideal but I’m not giving up on Blue just yet. 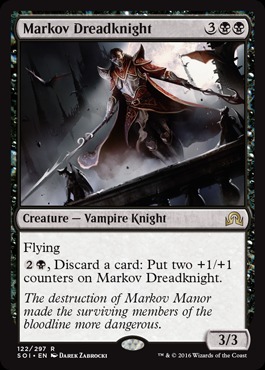 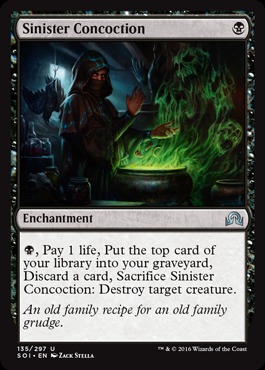 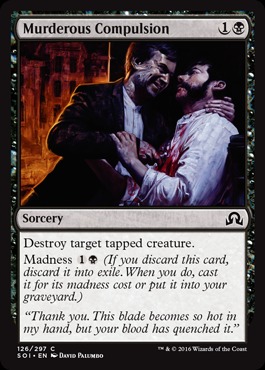 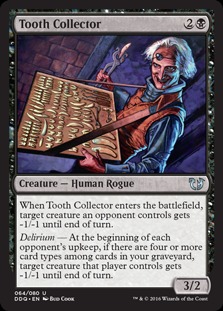 Fantastic. I’ve added Tooth Collector to our removal because there’s a surprising number of X/1s in the format. Furthermore, a Delirious Tooth Collector will warp combat math. He’s strong enough to be listed there.

Markov Dreadknight is the very definition of a bomb. He’s a big flying creature that can get bigger and enable Madness, one of the set’s main mechanics. Cards like Dreadknight are exactly what we’re looking for when we talk about bombs.

Last week, we also saw that our Black creatures were strong and our two Merciless Resolves can help us draw into our bombs and removal. Black is still at the top of my list of colours to play. 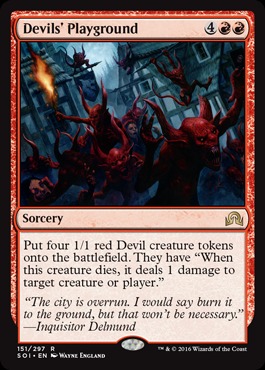 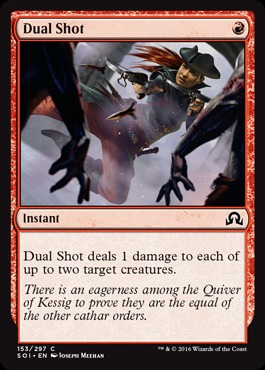 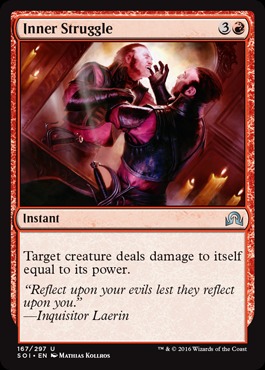 Devils’ Playground is very strong but as far as bombs go, it’s certainly on the weaker side. I’m happy running it, but I’m not happy that this is one of our strongest cards. I would have much rather opened something like Flameblade Angel. In all honesty, I feel the strongest cards in our Red pool are the two Breakneck Riders. 3/3 for 3 with massive upside? We absolutely want to run those.

Our removal is very good, if very conditional. Dual Shot is fantastic in the early game, not so much late game. Inner Struggle sometimes ends up being a dead card when you face down creatures with unfavourable non-square stats (creatures where the power and toughness aren’t equal). The rest of our Red pool isn’t fantastic either, so I’m apprehensive about it but I think we’ll keep it as a possible final colour. 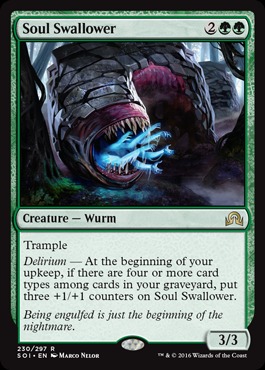 Soul Swallower can be very difficult for our opponents to deal with… if we can enable Delirium. Unfortunately, that doesn’t look like a strong strategy in our Green pool on its own. Green’s complete lack of removal here is another strike against it. We really wanted a Rabid Bite or at the very least a Moonlight Hunt, especially since we have a few Wolves and Werewolves in Red and Green.

As I mentioned last week, Green’s early aggression looks great, but I’m not sure it’s enough for us to want to run it, especially since our finishing bomb is conditionally dependent on us filling our yard. I think I’m comfortable setting Green aside as suboptimal.

Oh yeah. Forgot we have that Sorin guy. Hopefully all this fixing we’ve got can help us run him.

So we’re down to Black being strong, Red being okay, Blue being okay and White and Green are out. Let see what each of these decks would look like. I feel like this would be our strongest build for Black-Red and it’s pretty good. Six pieces of removal plus Tooth Collector. Merciless Resolve draws us into our bombs and Breakneck Rider makes our aggressive starts that much stronger.

What I don’t like are those two Hulking Devils. I guess they’re okay if we’re on the offensive, but they trade down too easily with their horrible 2 toughness. The other thing I don’t like is that four of five of our 1 and 2 drop creatures have 1 power. If we’re trying to be aggressive, we sure can get stonewalled by creatures with big butts pretty quickly. We also fold to fliers and control decks. If they have any way of preventing us from attacking, our Neck Breakers end up doing nothing.

The reasons to play Black-Red are our removal and our late game. Markov Dreadknight and Devils’ Playground coupled with 6 pieces of removal seems really good.

I don’t know if I’m sold with this build either. We only have three pieces of hard removal and two pieces of tempo removal with Gone Missing. The card draw is nice, but it’s not great.

The obvious problem here is our creatures. We’ve got a tower instead of a curve. A 1 drop, two 2 drops, 2 four drops, one 5 and one 6 drop… EIGHT 3 drops. This means our games won’t really start until turn 3 and we’ve got to hope we don’t get stuck on mana. I’m sure an argument could be made to cut one of the 3 drops and add the Lamplighter of Selhoff. Lamplighter is a solid card that works nicely with our Stitched Manglers and Stitchwing Skaab, but I wasn’t convinced it was enough to warrant running it in the main deck. I would definitely bring it in if I felt I needed stronger defence.

I do feel our Unimpeded Trespassers combo very well with our Neck Breakers, but that requires a lot of set up to get there. Overall, another okay build.

Now this is a deck! First off, let’s address the obvious questions: How can we run Sorin, Grim Nemesis and why in this deck and not the others? The answer is the same reason we’re running Ongoing Investigation here and not in the Blue-Red build: Our land fixing. Port Town taps for White or Blue meaning I’m comfortable running Sorin with Port Town and an additional Plains for the splash. Likewise, Ongoing Investigation is great on it’s own, but it’s better when we can run Foul Orchard to splash Green for the activation cost. The key with these two splashes are a matter of timing: Ongoing Investigation is fine in the early game and once we draw our Foul Orchard for the Green, it gets better for the late game. Likewise, we’re okay running Sorin on the 1 Port Town, 1 Plains splash because he’s a 6 drop. We don’t need Sorin in our early game and with the amount of card draw we have, the chances of us finding our W lands in the late game are very good.

This deck isn’t running as much removal as the Black-Red version, but I feel the removal here was the most impactful half of the Black-Red build. With the addition of Sorin’s -X ability which removes a creature and gains us life, I’m pretty confident with our ways of interacting with our opponent’s board.

I also like Magnifying Glass here. It helps us ramp to our late game cards quicker, helps us with our mana sinks in the late game and allows us to draw more cards if we end up stalling in the mid-late game.

Overall, I like the balance of card draw, bombs and air support and that Blue-Black gives us our deepest sideboard when compared to the other combinations. Had I opened this pool at a Sealed event, this is most likely the deck I would have run. Our Fate is Sealed

That wraps up our three part look at Sealed deck construction! I hope you had as much fun with it as I had. It was certainly more challenging to write then I originally anticipated, but I’m glad I was able to share these tips with all of you. I would love to hear your thoughts on the series and what your feelings may be on the final deck choice. Would you have also run the Blue-Black version? Would you have opted for the Black-Red or Blue-Red? Perhaps something else entirely? Leave a comment in the Comments section below!