Crack a Pack MTG Return to Ravnica with Bruce Crack a Pack MTG Return to Ravnica with Bruce

Welcome back to another Crack a Pack.  This week I have a special treat for everyone that will take us in the “Way back” time machine to almost 2 years ago.  Hard to believe. Last week I promised that I would bust open a pack from Return to Ravnica block, and true to my word, I picked up a pack of Return to Ravnica and will crack it open and see what we find.  Now, I admit, when I returned to playing Magic after a lengthy period of time off, I wasn’t exactly fond of the idea of drafting.  So, when RTR hit the stores I wasn’t much of a fan.  However, over time, I’ve come to really enjoy the format and totally wished I had been interested in drafting RTR when it was out and the new hot game in town.  Now, I just get to retro draft it…hopefully somewhere soon.  Anyway, no more wasting time, let’s open this exciting pack and see what we find. 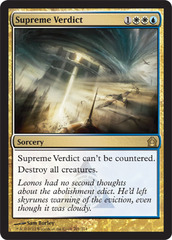 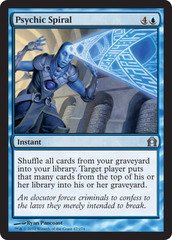 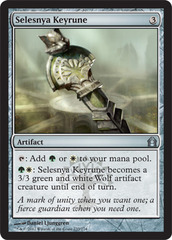 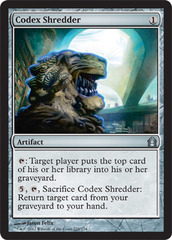 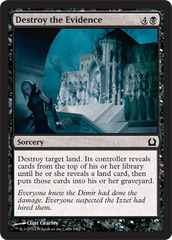 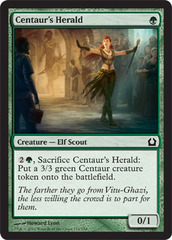 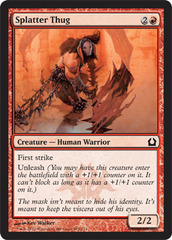 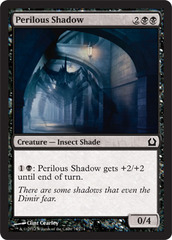 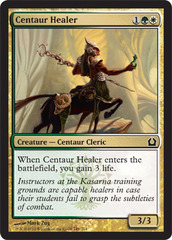 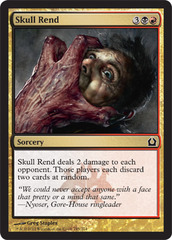 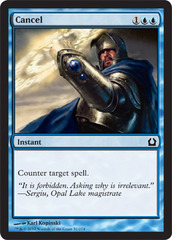 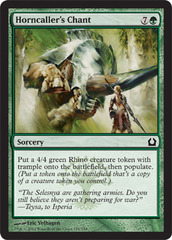 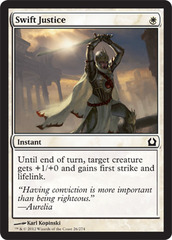 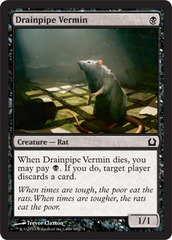 Ok, so this looks like a bit of a messy pack with a bunch of unexciting cards and healthy bunch of gold cards.  With so many gold cards in this pack I am less worried about taking them because I know they are everywhere.  That should sort of help ease my thought process, but it still leaves me looking at an ungodly number of gold cards.

My eyes are immediately drawn to the Supreme Verdict.  This is a perfect card to grab first because it acts as a complete safety valve and reset button.  4 mana, uncounterable mass removal?! Sure…where do I sign up.  Add in the fact that it is Constructed playable and worth plenty, and you have a very strong contender for first pick.

Another card that gets my attention is the Centaur Healer. 3 mana 3/3 creatures with a Enter the Battlefield trigger is a very solid creature.  The extra 3 life is pretty reasonable and is a solid body to start attacking with or to plug up the ground.  Either way, this is a very useful card.

Splatter Thug is another because while the card reads 2/2 first strike, it is really a 3/3 thanks to the Unleash ability (you weren’t really on intending to block with it anyway).  The difference is the first strike which pushes this ahead because it trumps most other 3 drops, including the Centaur Healer. I also like the fact that it is in a single colour giving it a little more flexibility because it could splash it in a larger number of decks.

Selesnya Keyrune also sparks some interest because mana fixing could be pretty crucial in a format with so many gold cards. The fact that it can double as a creature makes it somewhat appealing because it dodges some of the removal, although it clearly is a tad slow and the activation is a little clunky.

Centaur’s Herald is an interesting 1 drop that can be redeemed for a larger body which makes it very useful and a solid mid-round pickup. If only it was a 1/1 and not a 0/1 we’d be golden.

Skull Rend is a card that I’m intrigued with.  I like the ability to deal 2 damage and make my opponent discard two cards at random, but if I’m in Rakdos I don’t want to spend 5 mana on mediocre spells that don’t continue to pile on the damage in very large chunks. I can likely do better things with that 5 mana and do more damage. This might be a card I pick late round if I’m already in Black or Red and see if I can splash it…but I’m unsure.  The rewards on the discard could be amazing, but the cost and loss of relative momentum from that point leaves me a little concerned.

Psychic Spiral could be an interesting card if you want to play the mill strategy.  Splash it in a Golgari grave yard deck and see if you can’t get the accidental mill win.  I don’t know…this feels like it could be a surprise and wreck the odd opponent, but will largely be underwhelming.

Cancel is a perfectly reasonable 3 mana counterspell.  If you are playing Blue you want to have at least a copy or two of this in your pile, but I’m not lining up around the block to grab these and am happy to wait and see if I can’t find one later in the packs.

Drainpipe Vermin and Perilous Shadow are both reasonable black creatures to fill out your curve.  Both have interesting abilities that come along with them and as a result might be something you want, but they are undoubtedly later picks because their relative power level is quite low.

Horncaller’s chant seems like a solid card, but the 8 mana price tag for a pair of 4/4 rhino’s is pretty steep.  I would likely shy away from this unless I had some big time mana ramp.  It is interesting, in M15 drafts I have seen Feral Incarnation has been cast with some devastating results and the cards are both very similar.  The difference is the Convoke ability on the Feral Incarnation while with the Horncaller’s Chant you just got to get there. I would likely be shying away from this until the very last moment.

Codex Shredder plays a little bit to the graveyard synergies of the Golgari, but could also be part of mill strategy.  In either case, this is a fringe card that you might opt to run. I wouldn’t get excited about this and certainly won’t prioritize it, but if the situation arises, I’ll be happy to pick it.

Destroy the Evidence would be just about the last card I’d want.  5 mana to take out a land seems very steep.  The Mill effect that accompanies it is quite reasonable, I suppose, but I’m unlikely to be keen to mill out my opponent’s whole deck so I’ll likely avoid it too.

Swift Justice is a very marginal combat trick that could be nice, but I’m not likely to give it a spot in my deck.  Pass it and move on.

This week’s first pick is easy.  Supreme Verdict might be the best mass removal spell to have seen print in the last 5 years and to pass it would be criminal.  W/U is a colour combination I’m very comfortable in, the card plays right into that strategy beautifully, and even packs a little monetary value so after the draft I could trade it or sell it.  No, this is a pretty obvious first pick and one with a lot of upside.  The other cards in this pack are all mediocre but you aren’t going to rush out and jump on them and be excited.  You’ll play them, they’ll be acceptable, and you’ll pray that the next pack passed to you is better.

Well, there we have our pack for this week.  Did you enjoy the look back at a little Return to Ravnica?  I know I did…and I even found that Supreme Verdict, which has me pretty stoked. Would you have picked anything else? If yes, let me know, because I’d love to know what you would have taken instead.

Next week, for our 10th crack a pack (I know…where has the time gone!) I’ll be back to M15 as we start the final approach to Khans and the draft format changing all over again.  Don’t worry, I’ll be back to bust open a few Retro packs at some point too, but we need to get back to what’s hot right now and that’s M15.

Thanks for reading again this week and until next time may you open only Mythic Bombs.